A Winning Ratatouille Made In A Slow Cooker 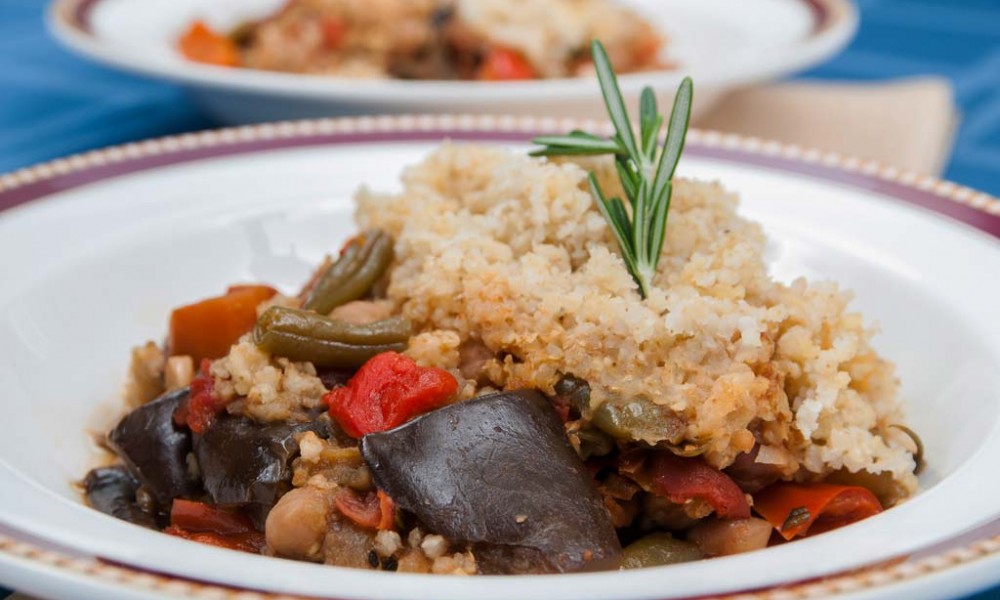 Near the end of summer, I make a big batch of ratatouille. I have long been partial to Julia Child’s method of cooking each vegetable separately, and then finally combining them all to simmer together briefly. I love how clearly you taste the eggplant, zucchini and peppers, but this method is so time-consuming that usually I make ratatouille only once, waiting until local tomatoes, peppers and other vegetables are at their best.

Friends who love using their slow cookers for all kinds of dishes recently convinced me to give this method a try. I was doubtful about the result since crockpot cooking, stewing everything together for an extended time, is the polar opposite of Julia’s method. I chose to make an off-beat ratatouille including green beans, carrots and chickpeas, along with frozen pearl onions since they hold together better than chopped onion.

To make this a complete meal, I spooned a layer of whole-grain millet over the vegetables and chickpeas. The result is a bit like couscous turned upside down since the millet sits on top of the vegetables rather than being cooked underneath them. Mellow tasting and not mushy, it surpassed my expectations. So although slow cookers take up a fair amount of counter space, I will enjoy using mine to make riffs on ratatouille using eggplant and other summer vegetables. Then I’ll move on to using it in a winter mode.

Note that if you have a slow cooker that browns or sautés, use that mode to brown the eggplant, sauté the other vegetables and bring the ratatouille to a simmer rather than doing this in a skillet and then transferring it to your slow cooker.

In medium saucepan, combine millet with 2 cups water. Cover and bring to boil over medium-high heat. Reduce heat to simmer and cook until millet is almost soft but slightly al dente, about 20 minutes. Set millet aside, covered, for 10 minutes. Fluff with fork, mix in Parmesan cheese and season to taste with pepper.

While millet cooks, make ratatouille. In large skillet, heat 2 tablespoons oil over medium-high heat. Arrange eggplant in 1 layer and cook until cubes are lightly colored on bottom, 4 minutes.  Using tongs, turn and color on second side, 3 minutes. If desired, turn and cook eggplant on a third side for 2 minutes. Transfer browned eggplant to 6-quart slow cooker. If any eggplant is stuck to skillet, scrape and discard it.