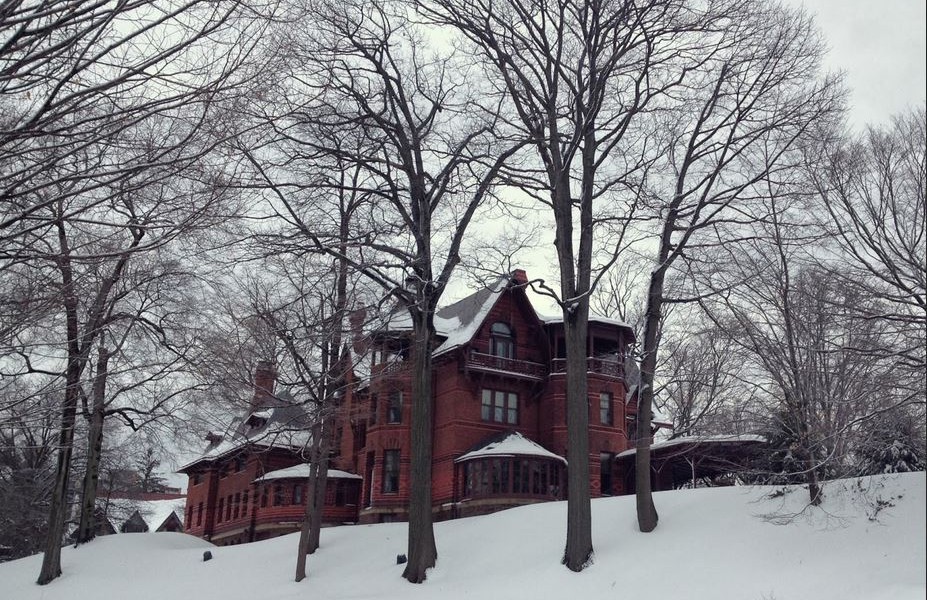 An hour and a half’s drive west from Boston brings you to Hartford, Connecticut, and The Mark Twain House & Museum and Harriet Beecher Stowe Center.  On a recent trip to Boston I made a side-trip with my wife, Carol, and two daughters, Shelby & Clarie, ages 10 & 8.  We came during an April snowstorm, but playing in the snow only added to the fun for my daughters.

The Twain house was once the residence of celebrated American author Mark Twain (Samuel Clemens) and his family 1874-91.  It was there that Twain wrote some of his best known books, including The Adventures of Tom Sawyer and the Adventures of Huckleberry Finn.  The unique red Victorian-style house was built under Twain’s direction in Hartford, which was America’s wealthiest city at the time.

The structure itself is well maintained today, and its interior is a recreation of what the house looked like during Twain’s time.  Tour guides take you through its different floors, including the entry area, kitchen, dining and drawing rooms, conservatory, billiards room (where Twain did much of his writing) and butler’s room.  The woodwork is beautiful, and the knickknacks inside give the guides the opportunity to tell stories of the Twain family, such as the homeschooling of his daughters.  During a tour you can experience the ups and downs of Twain’s life, and the tragedies he experienced, such as the loss of his fortune or the death of his only son at a young age.

The home also features some of the new inventions of the era, such as a telephone in the kitchen (where staff could answer it and get Twain).

Alongside the original house is the new museum, which includes permanent and rotating Twain exhibits.  During our visit, there was a rotating exhibit on the lives of Twain’s three daughters, only one of whom lived to old age.  There is also a theater which plays a documentary on Twain’s life, and a store.  Throughout the museum are famous Twain quotes on the walls.

In addition to a standard tour, the Twain house now offers tours by living history characters, such as Twain’s wife, Livy, or the family’s long-time lady’s maid.  Also, check the website calendar for special events.

There is a café which offers sandwiches, snacks and drinks, so come and make a day of your visit.  Just a few hours at the museum and house can give you a real connection with Twain and his family, and great insights into their lives.

On the property adjoining the Twain House was the Harriet Beecher Stowe Center and the house the famous American author occupied for the last 23 years of her life.  The Stowe house itself is currently closed for renovation, so our tour was in the Stowe Center itself and a nearby house which offered some exhibits.  The Center serves as a museum and interpretive center for the home.

Stowe is best known for being a Civil War-era abolitionist and penning the anti-slavery book Uncle Tom’s Cabin in 1852.  She later became a crusader for women’s rights.

The focus of the center is to share Stowe’s legacy in age appropriate ways.  The rear of the center is set up like a classroom, and you’re assigned to a guide who leads an interactive tour using exhibits and asking questions.  It begins with an introduction to Stowe’s family and famous father, Lyman Beecher, segues into her involvement with the abolitionist movement and the writing of her most famous book.  As Lisa Beede, who’s on the staff of the Center said, “Our tour focus, whether the interior of the Stowe House is on view or not, is to use Stowe’s story to inspire people to action. Stowe used her words to change the world and we encourage our visitors — both adults and children — to do the same.”

Visit both homes and receive a discounted admission.  It’s a great way to spend a day, and offers a hands-on history lesson about two of America’s most prominent 19th century authors.