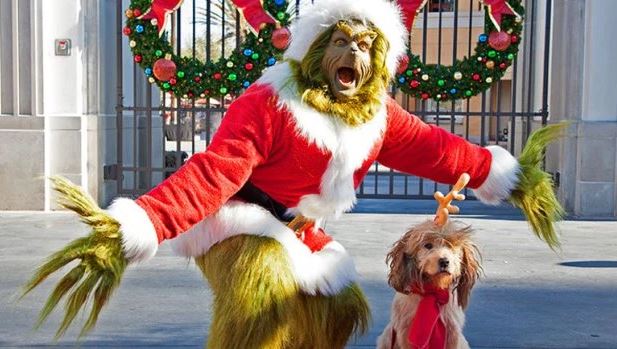 It’s always great fun to take the family to Universal Studios Hollywood.  Opened more than a half century ago in conjunction with the film studio that has produced some of the world’s biggest grossing movies, it combines a backstage studio tour with a theme park.  And, through January 1, you can enjoy Christmas-themed entertainment and décor including “Christmas in the Wizarding World of Harry Potter” and “Grinchmas”.

The Harry Potter-themed area of the park includes a Christmas-themed Hogsmeade village, the a cappella Hogwarts Frog Choir and its seasonal drink Hot Butterbeer.  Stay after dark and enjoy a light projection show around the Hogwarts Castle.  Grinchmas includes a 65-foot tall Grinchmas tree and live performances featuring the Grinch telling his story along with the Who-ville Whos culminating in a snowball flurry.  Take time to take a photo with the Grinch’s dog, Max.

In addition to Christmas-themed entertainment, enjoy the many fabulous attractions the park offers.  A staple is the Studio Tour tram ride that takes you on the Universal lot where you’ll see the sets from such movie classics as Alfred Hitchcock’s 1960 movie Psycho, and physically experience your tram being threatened by a T. rex and King Kong, Jaws, a flash flood and an earthquake.  Another favorite is the motion simulator Simpsons Ride which takes you on a simulated roller coaster combined with a zany film of the Simpsons characters.  If you want to ride on a real roller coaster, take a ride on the Revenge of the Mummy or the Flight of the Hippogriff in the Harry Potter section of the park.  If you want something more sedate for smaller children and older folks, try The Secret Life of Pets: Off the Leash.

Additionally, the live shows are lots of fun.  One of our favorites is WaterWorld, an exciting show combining stuntmen and water.  Another, Special Effects Stage, demonstrated how Hollywood’s dramatic visual effects work.  A third, Animal Actors, was our children’s favorite.  Dozens of different animals, from dogs to guinea pigs, performed tricks onstage to the delight of audiences.  Afterward, we had a chance to meet the animal performers.

We ate burgers and fries at Krusty Burger, in the Springfield/Simpsons section of the park.  Also, we saw many live characters of different eras strolling through the park for photo opportunities.

One suggestion if you can afford a little extra: get the Front of the Line Pass and you’ll find yourself walking onto the attractions.  It allowed us to avoid the lines and hit all the major attractions in a single day.  Head over to the park before the end of the year, and enjoy your day!