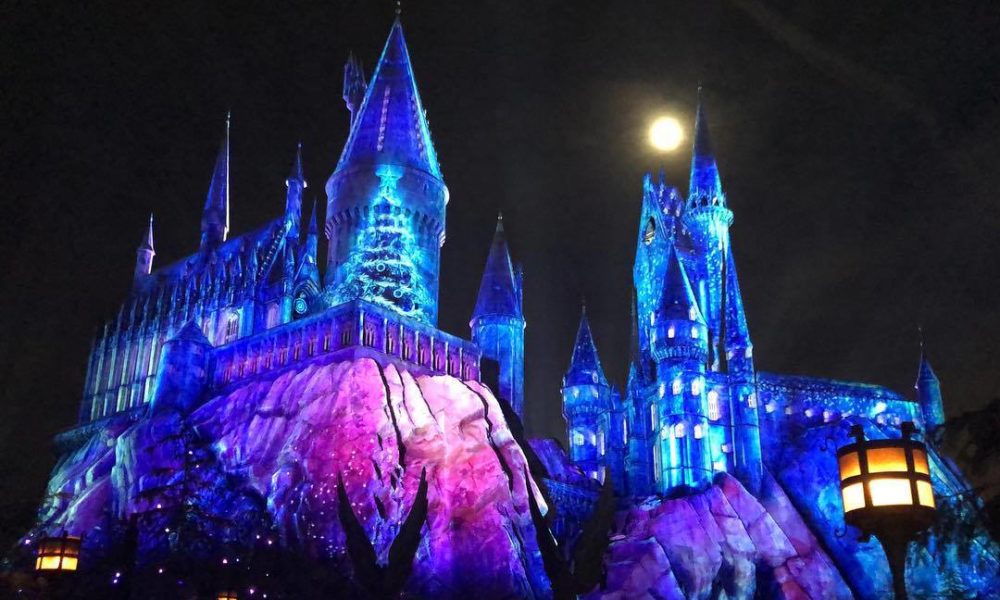 If you’re interested in movies and television or just wholesome fun, visit Universal Studios. Opened in 1964 in conjunction with the film studio that has produced some of the world’s biggest grossing movies, it combines a backstage studio tour with a theme park.  And, through December 29, you can enjoy special Christmas-themed entertainment.

The Studio Tour is a tram ride that takes you on the Universal lot where you’ll see the sets from such movie classics as Alfred Hitchcock’s 1960 movie Psycho, and physically experience your tram being threatened by a T. rex and King Kong, Jaws, a flash flood and an earthquake.

The rides were fabulous.  One of our favorites was The Simpsons Ride, in which you ride on a simulated roller coaster combined with a zany film of the Simpsons characters.  If you like dinosaurs and don’t mind getting wet, try the Jurassic Park ride.  You see lifelike dinosaurs and take an exciting plunge at the end.

If you’re looking for a fast roller coaster, try the Revenge of the Mummy ride in the lower lot of the park.  Another one is Transformers The Ride – 3D, also on the lower lot.  We also walked through the Walking Dead attraction … a lot of fun for older children, but not for the young ones!

They offer several live shows.  One, WaterWorld, was an exciting show combining stuntmen and water.  Another, Special Effects Stage, demonstrated how Hollywood’s dramatic visual effects work.  A third, Animal Actors, was our children’s favorite.  Seventy-five different animals, from dogs to guinea pigs, performed tricks onstage to the delight of audiences.  Afterward, we had a chance to meet the animal performers.

Perhaps the most popular attraction is The Wizarding World of Harry Potter.  From throughout the park we could see Hogwarts castle.  Inside this section of the park we enjoyed attractions such as Harry Potter and the Forbidden Journey and the roller coaster Flight of the Hippogriff.  Forbidden Journey is the most popular ride, allowing you to soar through the corridors and classrooms of Hogwarts castle.  You can also buy a wand at Ollivanders and enjoy Harry Potter-themed live performances.  There are also some great options for dining; make sure you try the popular Butterbeer. The Harry Potter area of the park will be themed to Christmas through December 29.

And, we went during “Grinchmas,” the park’s annual Christmas celebration which runs through the end of the year.  We met characters from the Grinch Who Stole Christmas—including the Grinch and his dog Max—and enjoyed lived shows themed to the season, include the a cappella Frog choir, comprised of Hogwarts students and their frogs. The Grinchmas tree is an annual favorite, twisting 55 feet in height.

We ate burgers and fries at Krusty Burger, in the Springfield/Simpsons section of the park.  Also, we saw many live characters of different eras strolling through the park for photo opportunities.

One suggestion if you can afford a little extra: get the Universal Express Pass and you’ll find yourself walking onto the attractions.  It allowed us to avoid the lines and hit all the major attractions in a single day.  We’ll definitely be back.