Philadelphia is an outstanding family vacation choice.  I recently went with wife Carol and our daughters, ages 10 & 11.  Below are some highlights from our trip. 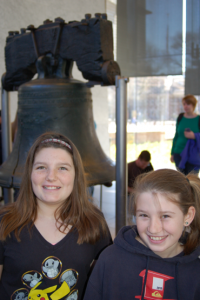 Eastern State Penitentiary is a fabulous Philadelphia attraction.  It housed inmates from 1829 to 1971; its most famous included Al Capone and Willie Sutton.  Using a headset and audio tour, you have the opportunity to tour old cells, long corridors, the exercise yard and many other aspects of the prison, including a Jewish synagogue, hearing audio tales of inmates and staff who were once at the prison.  There are many interesting exhibits about prison life and events that happened at the prison, such as the entrance to a 97-foot tunnel dug by inmates for a 1945 escape attempt.

Several blocks away from the Penitentiary is the Philadelphia Museum of Art, an iconic building offering a world class exhibition of art, including an impressive Impressionist collection featuring the work of such greats as Monet.  Check their online calendar for special exhibitions; we saw a watercolor exhibit featuring the work of Homer and Sargent.  They have an extensive regular collection; we enjoyed the medieval armor, Japanese tea house, and works from East Asia and the Byzantine Empire.  Go on the first Sunday of the month or on Wednesday evening and “pay what you wish.”  They also have a café.  Go early and avoid the crowds; start at the top floor and work your way down.  And, when you’re done, run up the famous “Rocky steps” and enjoy a great view of the City at the top.

In the historic end of town, visit the Betsy Ross House and learn about the life of the woman credited with sewing the first American flag.  Betsy was widowed twice by age 30, and worked as a seamstress and was involved in the Revolutionary War.  You can take an audio tour and see exhibits on different floors of the house; at the end of the tour, you can meet a Betsy Ross living history character who demonstrates to children how to make 5-pointed flag stars by folding the fabric and cutting it with special fabric shears.  In the bottom floor of the house, there is a hands-on exhibit with objects kids can handle; we also bought a Philadelphia sweatshirt at the House’s souvenir store.  There is a concession stand in the courtyard as you enter; stay and enjoy lunch afterward.

Across the Delaware River in Camden, New Jersey, is Battleship New Jersey.  Whether you’re interested in U.S. naval history, or you want a neat place your kids can climb around in, this is a great attraction.  This ship saw combat in World War II and was once the flagship of Admiral William Halsey.  It was re-commissioned multiple times in the following decades and was finally retired in 1991.  You follow a tour route throughout the ship—lots of steep stairways and low ceilings—and see the big guns, living quarters, barbershop, 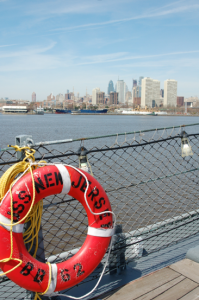 laundry, navigation area, missiles, galley and much more.  From the ship’s deck, you can enjoy great views of the Delaware River and Philadelphia.

We stayed three nights at The Windsor Suites, a perfect choice for families in the downtown area.  We had a large, one-bedroom suite, with two double beds and a queen-sized sofa bed in the living room.  It also had a large, walk-in closet, fully-equipped kitchenette and a balcony with a nice view of the city.  It is centrally located, near many attractions, such as the magnificent Cathedral Basilica of Saints Peter and Paul and Philadelphia Art Museum.

Across the street from Eastern State Penitentiary is Jack’s Firehouse, an excellent restaurant housed in a 19th-century fire station.  The restaurant is open for lunch and dinner; we went for the weekend brunch.  The décor is fantastic; high ceilings, old wood, and even a brass fireman’s pole.  Sit indoors or outdoors, if the weather is good.  It has a unique variety of Southern food, including buttermilk biscuits, cornbread, and cherries.  They have some great soups, such as black-eyed pea and ham, and other favorites such as the cheesesteak, pulled pork sandwich, burgers and homemade fries, spinach salad with grilled shrimp and crab cakes.  They have a great selection of beers; their Bloody Mary is highly rated.  Save room for dessert; we had warm chocolate chip cookies and butter cake.

A Reading Terminal Market, a busy shopping area in the heart of the City, we tried Maggiano’s Little Italy.  This is the place to go for Italian pizzas and pastas and an assortment of specialty dishes and appetizers.  You can’t go wrong with their lasagna, flatbread or ravioli.  Other good options include their chopped salad and filet mignon medallions with creamy mashed potatoes.  They also have a full bar and terrific desserts.  Generous portions and very kid-friendly.

When you’re visiting Independence Hall, stop by the Red Owl Tavern in Center City for a meal.  It’s directly across from Independence Hall and the Liberty Bell, and has outstanding food for the whole family.  We stopped by for brunch, which included waffles, pastries, French toast with apple cranberry compote and streusel, quiche, fruit, egg dishes and some great juices.  We also had some lunch items; try the Philly cheese steak or the tavern burger.  They make their own breakfast pastries and bread on-site; you can buy some extra and take it home with you.

If you enjoy ice cream, make a stop at The Franklin Fountain at the end of Market Street in the historic section of town.  This is the place to go for a wide array of homemade ice cream as well as sundaes, shakes, banana splits and floats.  They offer many unique flavors and generous portions.  It has an old fashioned feel with friendly young servers.  It’s well known in the community, and the lines are long (cash only).  We enjoyed a float, a sundae and some of their unique ice cream flavors; don’t be surprised if you change your mind a couple of times before you put in your order.

One final stop we made to eat was at the Iron Hill Brewery & Restaurant, which has locations throughout Pennsylvania and the surrounding states.  We went to the Maple Shade, New Jersey location after visiting Battleship New Jersey.  This is the place to go for pizza, burgers, steaks, soups, sandwiches, salads and fish & chips.  They brew their own beer, so they have many craft beers on tap (try the sampler).  They also have a kids menu and some outstanding desserts (try the Triple Chocolate Hill).

Philadelphia is a marvelous old city with some great attractions.  Look into a visit soon.