Mobile, Alabama has some great attractions for Utah families.  I went recently with wife, Carol, and children Shelby and Claire, ages 13 & 11, to see what the city and the surrounding area had to offer.  Here are some highlights.

Homewood Suites by Hilton Mobile I-65/Airport Blvd. – The Homewood Suites was conveniently and centrally located, clean and well maintained, with large suites and many amenities.  A good breakfast was included, there was a pool and exercise room.  It had a kitchen with a cooking area and refrigerator, and a separate living room with a sofa bed.  There were televisions in both rooms. 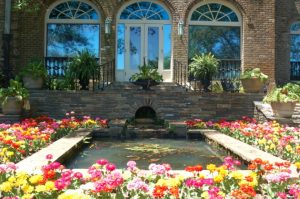 Bellingrath Gardens and Home – Bellingrath is the former home of a wealthy Coca-Cola bottler, Walter Bellingrath, who died in 1955.  It is a short drive outside of Mobile.  Located on the Fowl River, the 65-acre estate is home to beautiful gardens with something always blooming, fountains, walkways and a conservatory; the highlight of the tour is a visit to their 15-room brick home, which looks out onto the river.  The area around it teeming with wildlife; I took the Bayou Observatory Walk over a portion of the river and saw swimming turtles, large fish and even a water snake.  The grounds are well maintained and diverse.  The home appears as it did at the time when the Bellingraths lived in it, including original furnishings.  Eat sandwiches and snacks at its Magnolia Café.  A real highlight of our trip; it’s a great way to spend a day. 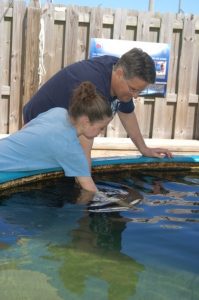 Dauphin Island – A few minutes away from Bellingrath is Dauphin Island, a long, narrow island with sandy beaches on the opening of Mobile Bay.  Its attractions include the Dauphin Island Sea Lab Estuarium , a public aquarium introducing visitors to the four key habitats of coastal Alabama.  More than 100 species of sea animals were on display, in aquaria themed to their habitat.  One of the highlights was the stingray petting tank (with stingers removed!), where you could touch with two fingers the rays passing by.  There is a gift shop; walk out in front of the facility for a magnificent view of Mobile Bay. 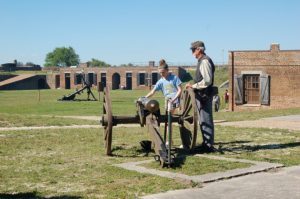 Fort Gaines – This old Civil War era fort is located on Dauphin Island alongside the Estuarium.  It is perhaps best known for taking part in the Battle of Mobile Bay in 1864, when Admiral Farragut famously told his men, “Damn the torpedoes, full speed ahead!”  Walk the site and enjoy magnificent views of Mobile Bay and the Gulf.  Enjoy the fort’s original cannons, kitchens, tunnels and museum.  We watched a historic reenactor fire a cannon, and the blacksmith at work. 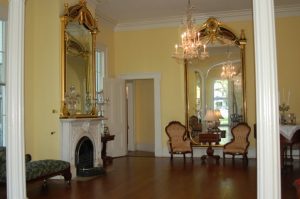 Bragg-Mitchell Mansion – This is a historic Mobile House built in 1855.  It had tours on the hour.  It has beautiful furnishings, including items original to the house, and well maintained grounds.

Richards DAR House – This is another of Mobile’s historic homes, built in 1860.  It is operated by the Daughters of the American Revolution, ladies who were knowledgeable, loved the old home and had much about it they wanted to share.  Our tour guide went into great detail about the people who once lived there, its furnishings and 19th century life in Mobile.  We even heard some interesting ghost stories about the place.  They were laid back about us sitting on the furniture (not so in all the old houses!), let us take photos inside and welcomed us with real hospitality.  We were invited to join them for spiced tea and cookies at the end of the tour. 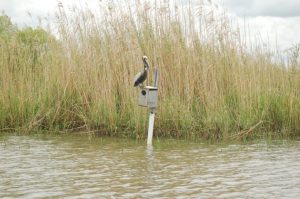 Airboat Express – The Mobile-Tensaw River Delta is rich in plant and sea life; take an airboat tour with Airboat Express.  We saw alligators in the wild and a variety of birds and learned about the wildlife in the region.  The owners are a married couple, Brittany and Geoff, who are very accommodating to visitors and knowledgeable about the ecosystem. 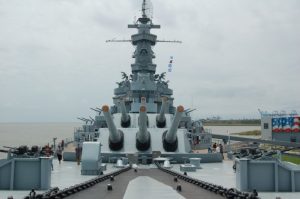 USS Alabama – This retired warship was used to fight in both the Pacific and Atlantic Oceans during World War II.  It is now moored permanently in Mobile Bay.  There are lots of ladders to climb to go below deck and then up to the bridge, but all is well lit, and there is even air conditioning below.  It’s a great way to see how the crew once lived and carried out its duties.  There are many displays to tell you about the men who took the ship to battle.  There are also many military aircraft on the grounds, and a submarine, the USS Drum.  It was our good fortune to come on a day many USS Alabama veterans returned to enjoy a mock battle with an attacking airplane.  One elderly veteran was given the opportunity to fire the same deck gun he had as a young man.

Moe’s Original BBQ – We went to the downtown Mobile Moe’s and enjoyed a great BBQ dinner.  They have some great sandwiches – we sampled the pulled port, smoked sausage and smoked turkey – a variety of BBQ platters and some delicious sides.  Some of the sides we enjoyed were the banana puddin’, baked beans, mac n cheese, potato salad and corned bread.  Portions were large.  They have craft beers on tap, and live music on the weekends.  They also have a great kids menu.

The Original Oyster House – This seafood lover’s paradise is located alongside the Airboat Express dock.  It features magnificent views of the Mobile-Tensaw River Delta, and delicious seafood, including oysters and a variety of shrimp dishes.  Other favorites include seafood Po’Boys and salads, seafood platters and some Southern sides (try the cheese grits!)  We shared the crab cakes, and I had the Shrimper’s Delight with shrimp prepared a variety of ways.  Great atmosphere, great service and very popular … don’t be surprised if you have to wait for a table!

Bonefish Grill – This is a pleasant seafood restaurant with a wide variety of seafood choices.  We had the Bang Bang Shrimp starter, which was served with a creamy sauce.  We opted for the soup over the salad – Corn Chowder & Lump Crab, very good – and I had the Caribbean Cobia as my main dish.  They offer steak and chicken for those who prefer not to eat fish, and some terrific desserts.  I believe we shared the Macadamia Nut Brownie.  There’s also a kids’ menu.