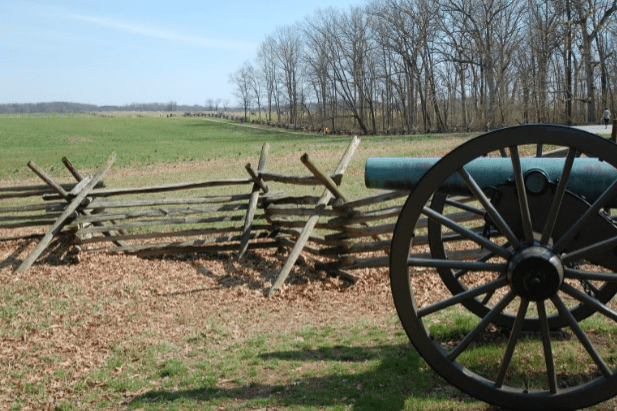 If you’re family is looking for an educational vacation this summer, consider, you may want to travel to Gettysburg.  I recently traveled there with my wife, Carol, and daughters ages 10 & 11.  If you love history, read up on the battle, so when you arrive, every field, ridge, hill, cluster of rocks, clump of trees and building will have meaning to you.  Or, if you’re there for beautiful scenery and great restaurants, there’s plenty of both.  Or, my children enjoyed the simple pleasure of climbing on the large rocks of Devil’s Den, one of the many interesting aspects of the battlefield.

The place to start is the National Park Service Museum and Visitor Center.  It features innumerable displays and historic items telling the story of the battle and life during the Civil War.  Highlights include the film A New Birth of Freedom narrated by actor Morgan Freeman, and the restored Gettysburg Cyclorama, which recounts Pickett’s Charge, the climax of the three-day battle.

After spending some time at the Center you can head out to the battlefield, perhaps best viewed with the assistance of a licensed battlefield guide.  We enjoyed a two-hour tour in which the guide drove our car, stopping along the way at significant points.  He had the ability to quickly show me elements of the battlefield I had read about, which I subsequently went back and toured on my own afterward.  There are many monuments to soldiers and old cannon throughout the site, along with magnificent scenery which made for some great photographs.

We used the resources provided by Destination Gettysburg to plan our trip, including in figuring out where to stay and eat.

There are many fine hotel choices in and around Gettysburg.  We opted for the affordable and family-friendly Wyndham Gettysburg, just off the Interstate 15 which runs alongside the town.  We chose a room with two queen beds; other amenities included a large indoor pool, a well-equipped fitness room and complimentary parking right alongside the hotel.  We opted to have breakfast both mornings at the hotel; all was delicious.  Like everything else in the town, there was a strong Civil War theme in the décor.

There is no shortage of terrific restaurants in Gettysburg; we chose to start at the Appalachian Brewing Company, which is located across the parking lot from the Wyndham Gettysburg.  It features pub house classics and dishes with a twist: Rockfish tacos, Thai coconut chicken and gumbo, fish & chips, ribs, burgers, sandwiches and soups and salads.  We also sampled their excellent craft beers; each of ABC’s six Pennsylvania locations has its own small-batch craft beer brewery.  ABC has two Gettysburg locations, the second being on the battlefield, as well as its original location in Harrisburg. 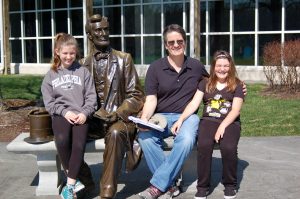 When you’re in downtown historic Gettysburg, try The Pub & Restaurant on Lincoln Square.  It’s a great place for a burger or pizza, the soups and salads are fabulous as well.  We had good luck with the spinach salad and French onion soup.  They also offer a kids menu.

And, definitely make time to visit historic Dobbin House Tavern, a historic 1776 home converted into a restaurant, pub and bed & breakfast.  We enjoyed an upscale dinner in the restaurant one evening; its elegant atmosphere pairs nicely with the menu of seafood, steak, poultry and other deliciously prepared meat dishes.  Starters include homemade bread; desserts include homemade pies and cheesecake.  Take a tour of the building when you’re done eating, as it was once part of the Underground Railroad which hid fleeing slaves.

If you’re family is looking for a great learning destination, travel to Gettysburg is an option you’ll definitely want to keep in mind.