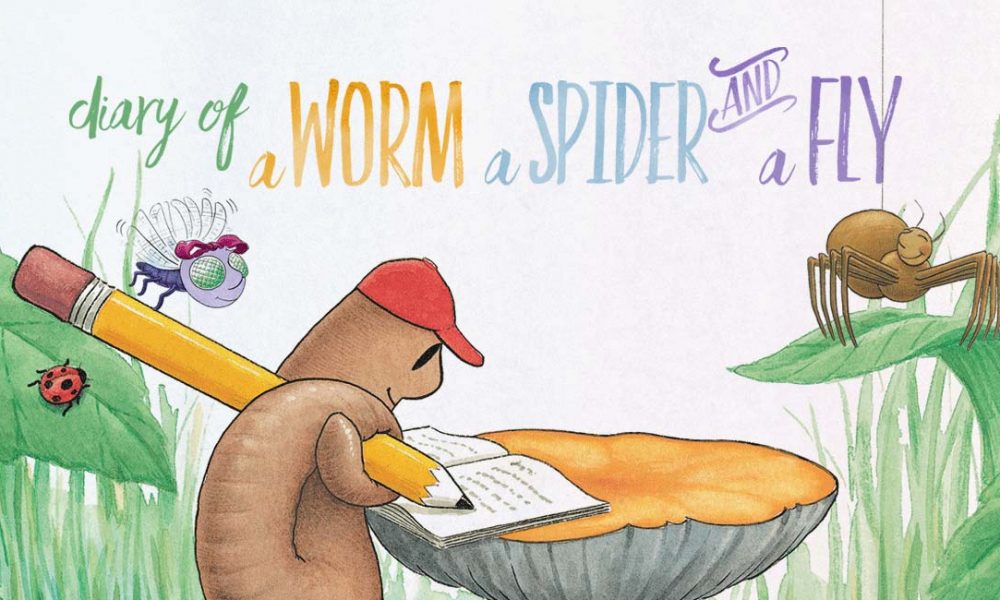 ‘Diary of a Worm, a Spider, and a Fly’ adapted by the book by Joan Cushing

Salt Lake Acting Company (SLAC) is preparing for the most wonderful time of the year! From December 2 through December 28, 2016, SLAC will welcome its youngest audiences for the musical adventure DIARY OF A WORM, A SPIDER, AND A FLY by Joan Cushing, based on the beloved book series by Doreen Cronin and illustrated by Harry Bliss. This year marks SLAC’s eighth annual professional play for children (of all ages) and with it, a wide array of community engagement and educational programs.

Based on the clever, colorful book series by Doreen Cronin and Harry Bliss, this musical adaptation combines the lives of Worm, Spider, and Fly as they head back to school. With musical styles ranging from rap and hip-hop to ballads and boogie-woogie, DIARY OF A WORM, A SPIDER, AND A FLY is fun for the whole family.

Penelope Caywood returns to direct and choreograph her seventh SLAC children’s play. She has worked as Artistic Director for Youth Theatre at the U for the past ten years and is excited to tackle DIARY OF A WORM, A SPIDER, AND A FLY.

Caywood says, “It’s not always easy being a young person, especially when you feel like you’re different from other kids. This comedic show deals with that reality through the life cycle of some creepy crawly characters. They discover that it’s okay to be different and that our unique qualities make us special. We all need to be reminded of this sometimes – even if it’s through a bug’s perspective. The story is heartwarming and the music is charming complete with rap, hip-hop, pop, and broadway.”

One of the most rewarding aspects of producing children’s theatre for Salt Lake Acting Company is its Title 1 Arts Education Program, which allows over 1,700 underprivileged schoolchildren to experience the magic of live theatre at no cost to them or their schools. With arts education receiving less and less attention and funding, this program plays a vital role in providing a more well-rounded education to Utah students.

Every children’s play that SLAC produces is based on a literary work. SLAC creates a study guide to accompany each play and distributes it to every class that attends the Title 1 Arts Education Program. The guide includes learning activities to be completed before and after the children see the play, reinforcing the connection between literacy and the arts. Terra Baker, a first grade teacher from Woodrow Wilson Elementary (a Title 1 school) said of SLAC’s Title 1 Arts Education Program, “This experience allows the students to see a book come to life. They were so excited to compare the play to the book, and it sparked their imaginations in the classroom.”

Also during this time of year, SLAC bolsters its commitment to enrich and engage community by partnering with several local organizations. SLAC has developed a special relationship with Intermountain Therapy Animals (ITA), a non-profit organization that brings animal resources to human needs in the areas of physical, occupational, speech, and psychotherapies, as well as special education. ITA launched its R.E.A.D. program in 1999 – the first comprehensive literacy program built around the appealing idea of reading to dogs. During the run of DIARY OF A WORM, A SPIDER, AND A FLY, SLAC will host volunteers from ITA along with their furry friends in the lobby to raise awareness and money for the organization.

SLAC is proud to once again partner with Voices for Utah Children, a multi-issue child advocacy organization that works to make Utah a place where all children thrive. They will be joining SLAC for a special performance of DIARY OF A WORM, A SPIDER, AND A FLY.

DIARY OF A WORM, A SPIDER, AND A FLY
Book, Music & Lyrics by Joan Cushing
Adapted from the Diary of a Worm series by Doreen Cronin and Harry Bliss

Children $15, Adults $25
Discounts are available for groups of ten or more.