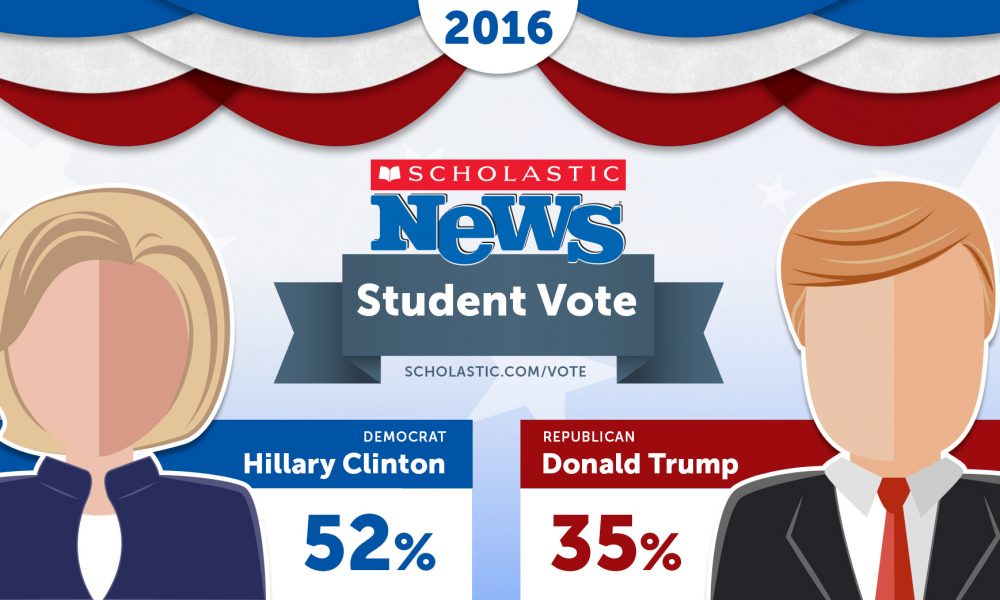 Democrat Hillary Clinton wins Utah with 44% of the vote to 27% for Republican Donald Trump and 29% for other candidates.

Approximately 153,000 students across the country in grades K–12 cast their ballots in the 2016 Scholastic News® Student Vote and the results are in: Democratic presidential candidate Hillary Clinton has been named the winner, with 52% of the student vote while Republican candidate Donald Trump received 35%. Thirteen percent of student voters wrote in “other” choices, a larger percentage than in past presidential elections. Write-in votes were cast for Libertarian Party candidate Gary Johnson (2%), Senator Bernie Sanders (1%), and Green Party candidate Jill Stein (1%), along with “Mom,” Kanye West, Harambe the gorilla, Spider-Man and “bacon.”

Votes in the 2016 Scholastic News Student Vote were cast by students in all 50 states and the District of Columbia. To see the full results, visit: www.scholastic.com/vote.

Since 1940, the outcome of the Scholastic News Student Vote has mirrored the results of every presidential election, except two: Thomas E. Dewey vs. Harry S. Truman in 1948; and John F. Kennedy vs. Richard M. Nixon in 1960.

“In this unprecedented and contentious presidential race, students have made their voices heard by casting their votes in our mock election for president,” said Elliott Rebhun, Editor-in-Chief of Scholastic Classroom Magazines. “The Scholastic News Student Vote is the culmination of a year of coverage in our classroom magazines and Scholastic News online, bringing the election to classrooms nationwide to inform students about the electoral process and the positions taken by the candidates on complex issues—from immigration and the economy to the environment. Our job at Scholastic is to support teachers with age-appropriate content that not only engages students and teaches them about the democratic process, but also helps them think critically about the issues.”

No, this wasn’t scientific — the methodology, in brief:

For ongoing coverage of the presidential election through Inauguration Day, students can visit the Scholastic News Election 2016 website for age-appropriate news and information about the electoral process, including original reports from the Scholastic News Kids Press Corps, the country’s oldest and largest national student reporting program.