Things to Do with Kids in Oahu 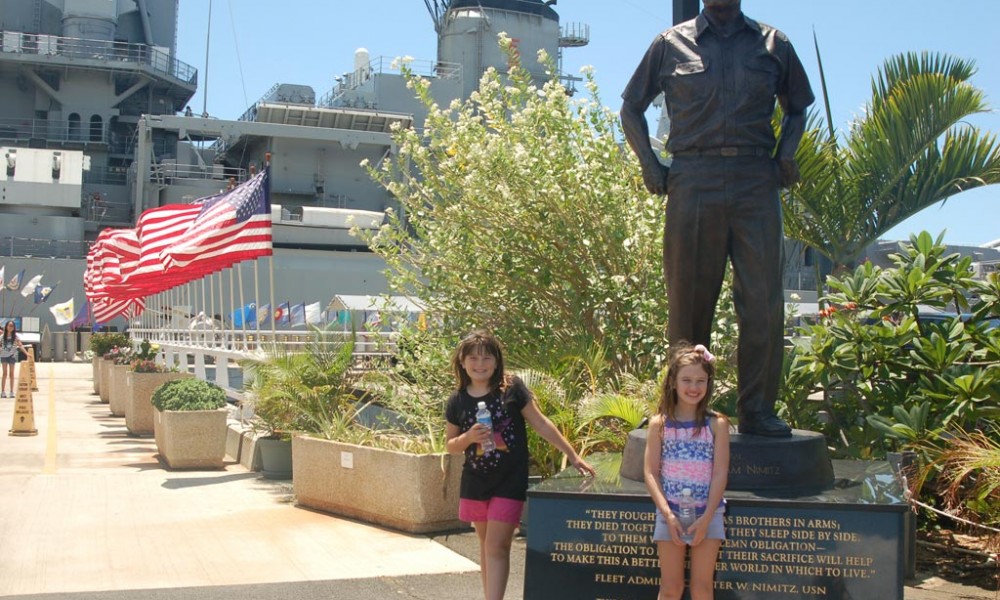 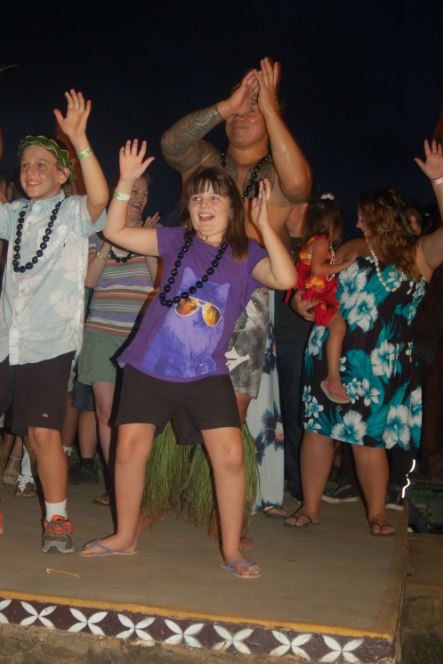 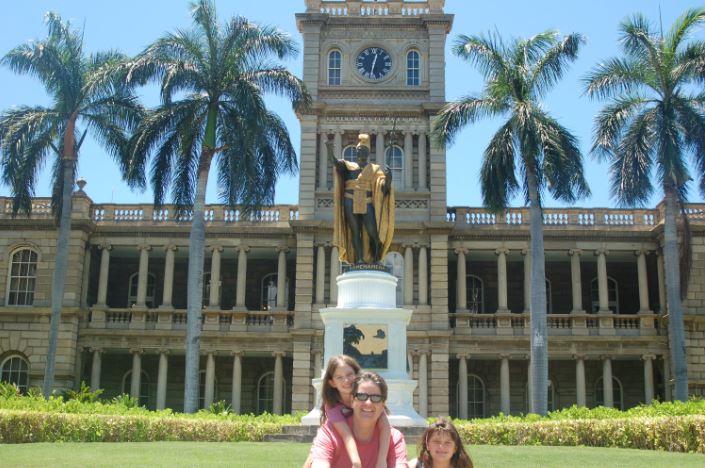 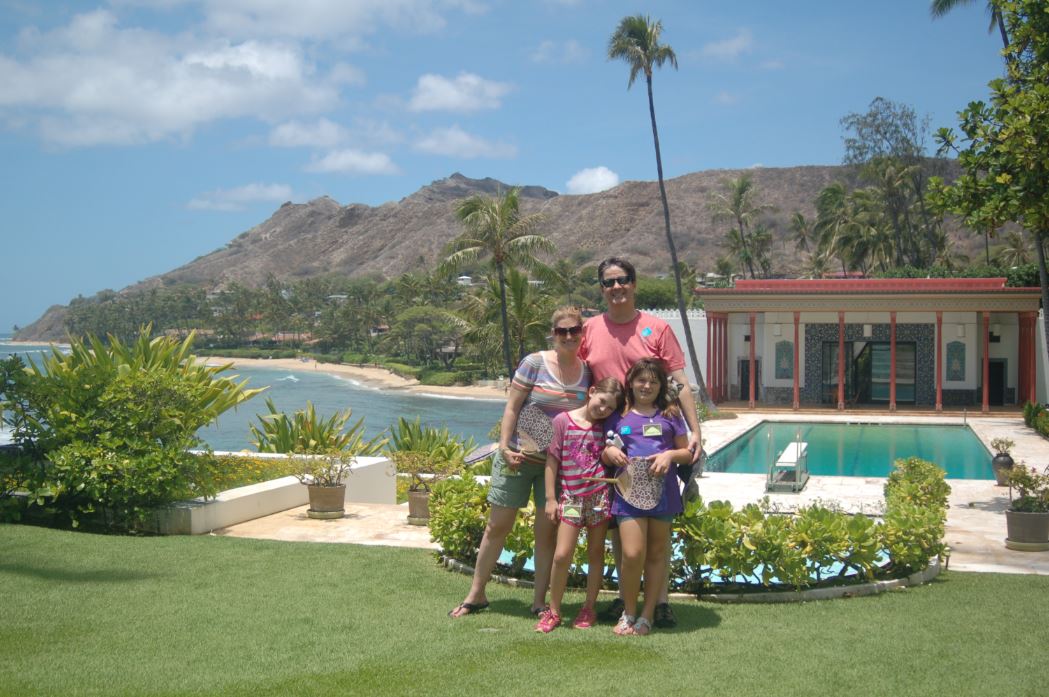 Oahu is Hawaii’s most populous island with its largest city, Honolulu. It’s a great place to start when you’re exploring the Hawaiian Islands; I went my wife and two daughters, ages 8 & 9, for a six-day visit. Here were some highlights.

We wanted to get the flavor of Waikiki Beach, so we began our stay at The Outrigger Reef Waikiki Beach. It’s located on the quieter north end of Waikiki Beach. Many of its rooms have balconies with great ocean views and quick access to Waikiki shops and restaurants. It has a salt water pool, a variety of arts & crafts activities for children and live entertainment in its pool/bar area (check out the Happy Hour pricing). We had a King size bed in the room, with a rollaway bed for the kids. It has all the amenities, and a competitive rate for middle class families (seasonal prices vary; check online for rates).

Another solid choice for those visiting Honolulu on a budget is the Coconut Waikiki, located on the Ala Wai Canal, about six blocks from the ocean. This Joie de Vivre hotel has a pleasant interior, a small but satisfactory pool, a small kitchenette and refrigerator and a great view of the canal and mountains. Also included is a basic breakfast which is included in the price of your room. It has less pedestrian traffic, and quicker access to attractions surrounding Waikiki. It’s a great alternative to the hustle and bustle of being on the beach itself.

Another affordable option is the Hyatt Place Waikiki Beach, a large hotel about three blocks from the beach. It gives you views of the ocean and Diamond Head, a pool and a large room with amenities and a skillet breakfast included. There are many restaurants and shops located nearby, as well as the Honolulu Zoo. It’s a good value choice for the area, with a friendly staff.

We stayed at all three of these hotels, each of which had its own charm and notable features. But, if you have more to spend, we dined at two luxury hotels which would both be outstanding choices for travelers.

Next to the Outrigger was the 5-star Halekulani, Waikiki’s third oldest hotel, celebrating its 100th anniversary in 2017. We ate a top notch breakfast at the Halekulani’s House without a Key, which had a full view of Diamond Head. The breakfast bar was outstanding, and the service staff attentive. In fact, the Halekulani’s 453 rooms are served by a staff of 820, so the hotel is oriented towards first-rate service. House without a Key is the most casual of the Halekulani’s three restaurants. There is also a Lewers Lounge jazz club and an opportunity for an afternoon tea.

The hotel is oriented so its rooms have great views of the ocean and Diamond Head, with a centrally located pool and direct beach access. Enjoy live evening entertainment in a grassy area adjoining House without a Key, under the hotel’s 200-year-old Hau tree.

Another 5-star choice located about 15 minutes away from Waikiki is the revered Kahala Hotel & Resort. Founded in 1964 by Conrad Hilton, this Japanese-owned hotel has long been a favorite of celebrities (see their lengthy hallway with photos of celebrities taken at the Kahala over the past 50 years). It features spacious rooms, outstanding views, a fabulous central pool, well maintained grounds, a quiet section of beach and, perhaps most famously, a dolphin lagoon. The lagoon’s six dolphins perform shows daily and guests can swim with the dolphins through Dolphin Quest, the company that maintains the lagoon. There’s a complimentary shuttle downtown, and a children’s program for kids. We ate one of the hotel’s restaurants, The Veranda, which offered excellent food with views of the ocean and hotel grounds.

If you like rock and roll and a good hamburger, try the Hard Rock Café Honolulu. Its menu includes burgers, seafood, salads and desserts, as well as many specialty drinks. You enter through the Hard Rock store, and walk upstairs to an open dining area that looks out onto Honolulu’s busiest tourist street, Kalakaua Avenue.

The high ceiling is decorated with hundreds of electric guitars, and the walls with memorabilia from rock stars such as The Beatles, Jimi Hendrix and Elvis, and even Hawaii 5-0’s Jack Lord. Big screen TVs play hits of stars from different eras.

The Yard House was another great family dining choice. It featured healthy fare with local ingredients, a full array of bar choices and fabulous desserts. Some suggested dining choices include the California roll, made unique to the restaurant, crab cakes, any of the fish choices and the hamburgers (which my daughter said “tastes amazing”). For dessert, we loved the Salted Caramel Butterscotch Pudding.

It’s located on the touristy Waikiki Beach Walk, and has many big screen TVs with sporting events.

Another good dining choice is Dukes Waikiki, located on the beach in its busier central hub with great views of both the ocean and Diamond Head. This restaurant is named for famed surfer Duke Kahanamoku (1890-1968), an Olympic gold medalist who once surfed in the waters directly in front of the restaurant. Dukes offers such food items as fish, burgers and salads, a full bar, a kids’ menu and some incredible desserts (try the Hula/ice cream pie).   They also have a great breakfast buffet. It’s a great way to enjoy some fantastic food and soak in the Waikiki ambiance.

In the Royal Hawaiian Center, a large shopping mall in central Waikiki, there are many dining options. We opted for P.F. Chang’s. They offer fabulous Chinese food just off the busy Kalakaua Avenue, a great place for people watching in the heart of Waikiki. There is a wide variety of choices on the menu; some suggestions we’d make include the chicken lettuce wrap starter, wonton soup, pork dumplings, the ribs and the Kung Pao chicken or shrimp. All dishes were fresh, well presented and easy to share. The prices were affordable for Waikiki, especially during the afternoon happy hour. Bring your appetite, as the portion sizes are large.

The Iolani Palace was once the home of Hawaiian royalty in the 1800s. Located in downtown Honolulu, this stately, two-story residence underwent many uses before it was declared a national landmark and restored to its monarchy-era appearance.

We enjoyed seeing the bedrooms, dining and living rooms, greeting hall and more, while listening to an easy-to-use audio player which shares the history as you go room to room. The interior is clean and well maintained; the grounds include large banyan trees great for a photo opportunity. The palace was popularized as McGarrett’s headquarters in the original Hawaii 5-0 (the reboot series uses the Hawaiian Supreme Court building across the street).

No visit to Oahu is complete without a stop by Pearl Harbor, the site of the surprise Japanese attack on the American Pacific Fleet on December 7, 1941. Begin with a visit to the USS Arizona, a battleship which went down during the attack, taking 1,177 sailors with her. The USS Arizona memorial is free, begins with a short movie and involves riding a naval shuttle to the site of the sunken ship to walk on the memorial built above her.

There are multiple options that share other aspects of World War II history you can choose from; we opted to visit the USS Missouri, the battleship on which representatives of the Japanese government signed surrender papers to end World War II. This huge ship is lots of fun for kids of all ages to explore, with many exhibits sharing information of what it was like to live on board the ship.

One of my favorite was an exhibit featuring the Japanese Kamikaze pilots who attacked the USS Missouri and other American navy ships in the Pacific towards the end of the war. The exhibit included photos and stories of some of the pilots, as well as the final letters they had written to family before flying off on suicide missions in a desperate attempt to change the tide of war.

There are both guided and self-guided tours; you can breeze through in 30 minutes or spend your day there. The USS Missouri is moored on an active military base, so you must take a bus from the same center where you go out to the USS Arizona.

If you love art and beautiful homes, visit Shangri La, once a home of wealthy heiress Doris Duke (1912-93). The tour is offered in conjunction with the Honolulu Museum of Art; you take a 20-minute ride on a bus from the museum to the home. The youngest allowed on the tour is age 8; so with our youngest we barely made it.

Shangri La is on an idyllic ocean-front location behind Diamond Head in one of Oahu’s most expensive neighborhoods. It features a wide array of Islamic art, which Duke collected on her travels during her lifetime. The art is housed in a well-maintained house on the Pacific Ocean, which is more like a small museum rather than a house. The grounds are beautiful and include a pool; I especially liked the lanai, an outdoor patio where she once dined with the Pacific Ocean crashing below.

In addition to the Shangri La tour, we had the opportunity to tour the museum itself, which included art from a variety of cultures that dated back many centuries.

If you’re looking for something for the kids to do around your Waikiki hotel but don’t want to drive, walk over to the Royal Hawaiian Center. They offer free cultural classes for children; we did lei-making. First come, first served. Other options include hula, storytelling, quilting, weaving and ukulele. Check the website for the schedule. There are lots of opportunities for shopping and eating in the center afterward.

There are many luau options on the islands, but one of the best is Chief’s Luau at Sea Life Park, about a 25-minute drive from Waikiki. The luau is held in a beautiful setting overlooking the Pacific, and is led by Samoan-born Chief Sielu and his team of performers. Your evening begins with weaving and hula lessons, and an introduction to how a pig is cooked in the ground.

There are three different seating areas—all have satisfactory views of the stage—and a self-serve buffet featuring a decent meal of such foods as pork, chicken, fruit and cake. The show features a variety of Polynesian dances, audience participation and jokes by Chief Sielu, who serves as host. One of the highlights was a fire baton dance at the end.

It was a great trip. We love the islands, and we’ll soon be back.

Tags: family travelhawaiihonoluluoahuthings to do with kids