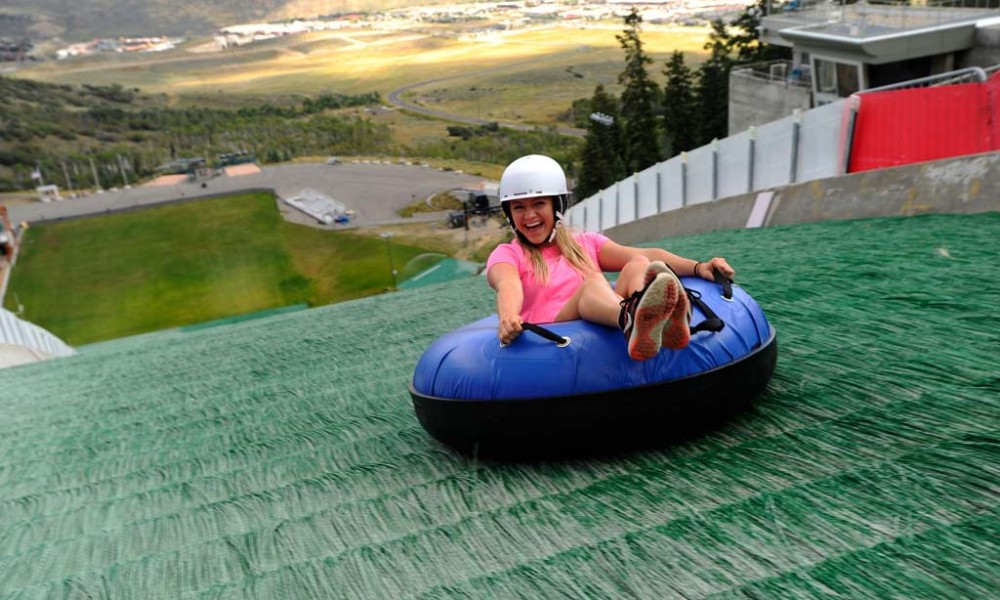 The Utah Olympic Park yesterday announced the addition of a new adventure activity, Extreme Tubing, opening to the public starting Thursday, August 20. Participants will have the opportunity to slide down the landing hills of the iconic K64 and K90 Nordic ski jumps while riding in a specially designed inner tube featuring a hard plastic bottom. Guests can expect to reach speeds up to 50 mph.

The K90 Nordic ski jump was used by competitors during the Salt Lake 2002 Olympic Winter Games. Today, Nordic Combined and Nordic ski jumping athletes train at the Utah Olympic Park year-round. In the winter, the ski jumps are covered in snow whereas in the summer season, athletes train on a synthetic surface that mimics movement on snow when wet. The plastic matting is designed by a Finnish company, EverSlide, and used by over 300 ski jumps worldwide.

“The Utah Olympic Park strives to bring Olympic-level sport experiences to all ages and abilities,” said Marc Norman, Vice President of Sport and Venues. “For our guests, Extreme Tubing will bring to life the thrill of Nordic ski jumping.”

The summer Comet bobsled rides are available daily through September 7 and also changes to a fall schedule, operating Friday to Sunday from September 11-27. The Alf Engen Ski Museum and Eccles 2002 Olympic Winter Games Museum are open daily from 9 a.m.-6 p.m. and admission is free.

For a complete schedule of activities and hours of operation, visit UtahOlympicLegacy.org.