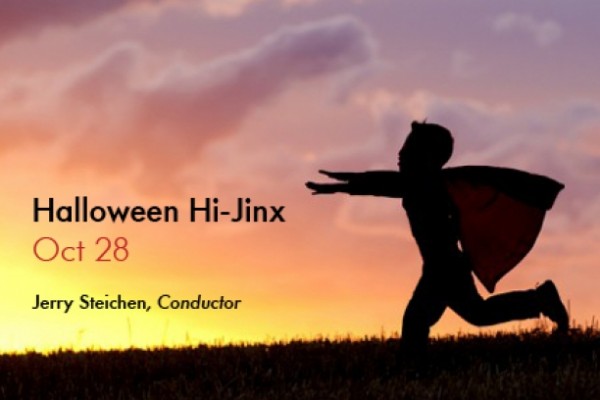 The Utah Symphony is dressing up for the 24th annual Halloween Hi-Jinks concert and costume contest on Oct. 28 at 7 p.m. at Abravanel Hall. Principal Pops Conductor Jerry Steichen, one of America’s most versatile conductors, dons the baton to conduct music from “The Phantom of the Opera,” “The Witches of Eastwick,” “Die Walküre,” “Harry Potter,” and more. This spectral spectacle is sure to entrance all audiences with unique costumes and thrilling music.

Sponsored by KSL NewsRadio and Salt Lake Comic Con, the Utah Symphony’s traditional Halloween Costume Contest will precede the concert in the lobby of Abravanel Hall from 5:30 p.m. to 6:30 p.m. Guests from KSL NewsRadio and Salt Lake Comic Con will judge the contest, which has been known over the past 23 years for its exciting prizes and outrageous costumes. Everyone is welcome to dress up in their Halloween costume and participate in the contest, the largest in the state, where families, groups and individuals can compete for great prizes provided by local business and non-profits. The winners will be announced on stage.

This year’s prizes from community partners include VIP and day passes to Salt Lake Comic Con 2015, an Annual Family Membership and a golf foursome from Thanksgiving Point, a Family Membership to the Utah Museum of Fine Arts, passes to the Utah Natural History Museum, Tracy Aviary, The Leonardo’s Body Worlds and Spooky Science events, and air time at the Airborne Trampoline Arena.

Tickets, priced from $6 to $18, are available for purchase through www.utahsymphony.org or by calling (801) 355-2787. $10 tickets are available to all performances for patrons 30 or younger. Tickets increase $5 on the day of the performance.

About the Utah Symphony:
Founded in 1940, the Utah Symphony is dedicated to offering orchestral performances that span the traditions of the past and challenge possibilities for our present and future audiences. Utah Symphony | Utah Opera, the orchestra’s parent organization, reaches 450,000 residents in Utah and the Intermountain region, with educational outreach programs serving more than 155,000 students annually. The orchestra presents more than 70 performances each season in Abravanel Hall, participates in the Utah Opera’s four annual productions at the Capitol Theatre, in addition to numerous community concerts throughout Utah and the annual outdoor summer series – the Deer Valley® Music Festival –in Park City, Utah. With its many subscription, education, and outreach concerts and tours the Utah Symphony is one of the most engaged full-time orchestras in the nation. For more information visit www.utahsymphony.org.