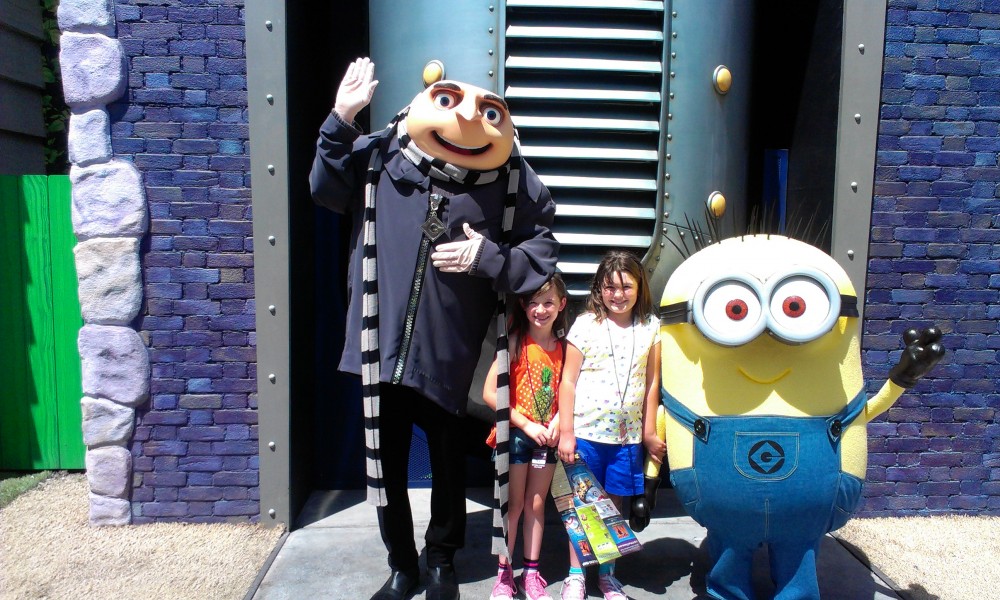 Want to take a break from the winter cold? Los Angeles is a quick flight from Salt Lake City, and has much to do for Utah families. We recently took a trip; here are a few highlights.

Universal Studios (www.universalstudioshollywood.com) is a great place to spend a day. It opened 50 years ago as a theme park and backstage tour of its namesake film studio.

We took its famous tram ride Studio Tour and not only enjoyed seeing the sets from famous movies such as Alfred Hitchcock’s 1960 movie Psycho, but with movie special effects had our tram threatened by a T. rex and King Kong, the Jaws shark, a flash flood and an earthquake.

The park has fabulous attractions such as The Simpsons Ride, a simulated roller coaster combined with a zany film of the Simpsons characters. There are many live shows, such as the WaterWorld stunt show and the Special Effects Stage. There were many movie characters of different eras strolling through the park, and no shortage of good restaurants.

Universal Studios has some major improvements coming to the park in 2015 & 2016. 2015 will feature the opening of Springfield, hometown of The Simpsons, including Moe’s Tavern, Krusty Burger and Duff’s Brewery. It will also mark the opening of “Fast & Furious—Supercharged,” a thrill ride based on the action film series distributed by Universal Pictures. 2016 will see the opening of “The Wizarding World of Harry Potter,” inspired by J.K. Rowling’s book series brought to live by Warner Bros. films. Its focal point will be Hogwarts castle.  Looking forward to heading back.

If you’re interested in a couple of inexpensive but classic tourist stops, try the iconic Griffith Observatory (www.griffithobservatory.org). Its art deco buildings and grounds have been the backdrop in many films. It’s free, and you can enjoy astronomy exhibits: learn, for example, about our solar system, manipulate a model telescope or discover how the moon affects tides. We paid a few dollars to watch Centered in the Universe in the planetarium theater, which gives a great overview of the history of astronomy and our place in the cosmos.

The Page Museum (www.tarpits.org) is another must-see stop, located on Wilshire Boulevard at the site of the famous La Brea Tar Pits. Wildlife and oil were once abundant in Los Angeles. The “pits” formed when oil seeped up and combined with pools of water to form sticky traps for such now-extinct animals as saber-toothed cats, mammoths, sloths, dire wolves, Western horses, condors and mastodons. A wealth of fossils remains, and the museum was established to display them.

The excavation continues; you can actually watch paleontologists at work. Also, make time for Ice Age Encounters show and you can see a realistic portrayal of a saber-toothed cat.

If you have girls, stop by the American Girl Place Los Angeles (http://www.americangirl.com/stores/location_la.php) in The Grove, a fabulous mall near the Tar Pits. The store features high-end dolls and accessories. You can pick a doll themed from a particular period in history, or choose hair and eye colors to match those of your daughter to create one that looks like her. Dolls have their hair done and ears pierced, and you can have dinner with her in the second floor café. We ate in the café; the food was good and you had a great view of shoppers strolling below.

While at the Griffith Observatory, we had lunch at its The Café at the End of the Universe operated by Wolfgang Puck. Best described as gourmet grab-and-go, you can enjoy terrific sandwiches, salads, sushi, snacks and desserts combined with indoor and outdoor seating enabling you to enjoy the scenery.

A great new eating option in Los Angeles is Lemonade (www.lemonadela.com), which serves “seasonal Southern California comfort food” in a cafeteria setting. There are many healthy, tasty choices, including unique salad and vegetable dishes, a variety of meat dishes, desserts and, of course, lemonades.

We found another great restaurant in the LA suburb of Pasadena, Dog Haus (www.doghaus.com). It’s a delicious hot dog and hamburger place, which offers a variety of toppings. Choose one of their creations, or build your own.

For lodging, we chose the outstanding Sofitel Los Angeles at Beverly Hills (www.sofitel-los-angeles.com). This beautiful luxury hotel is located near many Hollywood/Beverly Hills attractions, and features modern décor themed to Hollywood movies. The staff was gracious and attentive, and the French classic cuisine at its Estérel restaurant was delicious. It also has a hip bar, spa and outdoor pool.

We had a great experience in LA. Hope you have a chance to visit soon!