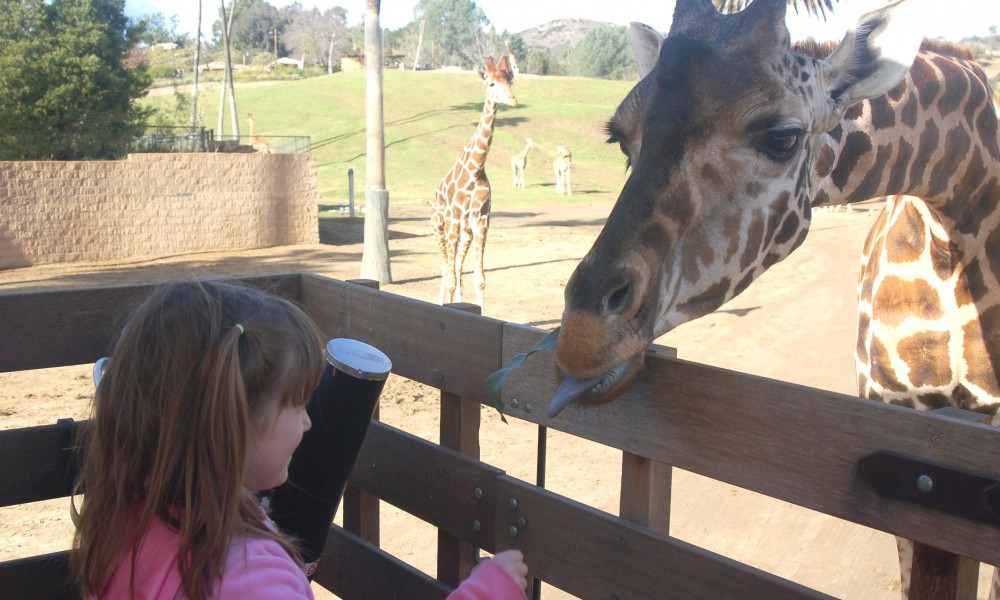 Want to escape Utah’s cooler winter temperatures?  Hop on a flight to San Diego and enjoy warmer temperatures and many fun Christmas-time activities.  I got back recently with my family, and we enjoyed an outstanding trip.

If you love exotic animals and want to try something a bit different than the traditional zoo, the San Diego Zoo Safari Park is for you.  They have an extensive collection of African and Asian animals, and a variety of safari experiences to enjoy.  We took the Safari Caravan, which offered a unique up-close look at the animals.  Whereas the basic tram safari takes you on a loop around the animals, our upgraded experience put us on a truck with a small group amongst the animals themselves.

Highlights included a drive alongside a waddling rhino, a face-off with a wary cape buffalo, an encounter with a curious ostrich (he poked his head into the truck) and a chance to hand-feed giraffes.  After our caravan, we enjoyed tigers and lions (in a separate, fenced-in area), an elephant enclosure and bird aviaries.

The Park has some other neat safari options, including a zip line safari that takes you over the entire park, a rolling Segway safari and an overnight safari that gives you the option of sleeping amidst the sounds of the plains.

San Diego’s Balboa Park has many museums; we visited the Reuben H. Fleet Science Center.  Little kids like to touch and grab, and there’s plenty of tactile experiences at the Fleet.  Permanent exhibits include Kid City, which included a “Ball Wall” with chutes, tracks and moving objects, colorful pinwheels rotating round-and-round, a play grocery store, blocks and a magnetic wall.  The “Look! Touch! Listen!” exhibit featured such attractions as The Tornado, a spinning fog tornado that appears and disappears.  We especially enjoyed “Flight of the Butterflies,” an hour-long IMAX movie on a dome screen that told the story of one scientist’s 40-year study of the monarch butterfly.

Any trip to San Diego should include a stop to the resort town north of the city, La Jolla.  We spent an afternoon at the Birch Aquarium located on the campus of UC San Diego.  The university is known for its oceanography institute, Scripps; Birch Aquarium showcases the work of Scripps.  Birch has a wide array of sea creatures in aquaria; we watched divers hand-feed fish in the large kelp aquarium.

There is a touch tank in the Tide-Pool Plaza, which also has stunning ocean views. There was an extensive research area, much of it focused on climate change, and an outdoor interactive play area for kids designed to teach kids about science with hands-on activities.  There was also a sea horse exhibit (a sea horse is a fish, we learned).  There were plenty of hands-on activities for kids, including coloring your own handbag with fish designs.

We stayed in a King Suite ($239/night) at the outstanding Best Western Plus Island Palms Hotel & Marina.  The suite had a master bedroom, a king-size sofa bed, and a fully stocked kitchenette.  The interior was new and clean, and we enjoyed its high ceilings.  We were on the 2nd floor, and parked right outside the room.

Our suite had a perfect view of downtown San Diego as well as the navy facilities across the bay on Coronado (one morning we watched a huge navy ship head out to sea).  Behind us was a beautiful marina.  Also close by is the Cabrillo National Monument, known for its tide pools and stunning views.

The best breakfast we enjoyed on the trip was at Snooze Eatery, located in the City’s Hillcrest neighborhood.  Snooze got its start in Colorado, and has now penetrated the California market.

Snooze has a hip, bright, casual open atmosphere.  It plays funky rock music, and has an eclectic clientele, including many families.  It features tasty breakfast and brunch food, such as pancakes, waffles, French toast, bacon and sausage.  It’s a great place to wake up, start your day and enjoy an outstanding meal.

If you want to eat Mexican, try Ponce’s Mexican Restaurant in the Kensington neighborhood/Adams business district.  This family-owned restaurant offers great food at modest prices.  I opted for the chicken chimichanga, my wife a wet burrito (I’m embarrassed to say my kids had burgers and fries).  The place was packed on a Friday night, and catered to people of all ages, babies to senior citizens.  The bar area had many singles.  They feature an inexpensive kids menu, with coloring to keep the kids busy.  They also had good desserts.

The décor was traditional Mexican; my kids loved looking at the many paintings of Spanish senoritas above their heads.  It was crowded; obviously it is popular with the locals.  The staff is dedicated; our hostess mentioned she had worked there nearly two years, a short time compared to other employees who had been part of the family business for 15 years or more.

If you want a good family seafood place, try King’s Fish House in Mission Valley.  It has a pleasant, relaxed “down by the dock” décor, and a great variety of seafood (as well as a variety of non-seafood choices).  They had a kids menu, as well as coloring books and stickers for the kids.   My kids—surprise, surprise—went for the hamburgers; I don’t ever recall my daughter Shelby gobbling up a burger so quickly.  Seafood is easy to overcook; but again, both my wife’s and my dishes were excellent.  It had a good wine selection as well.

Take a trip to San Diego, and have fun!