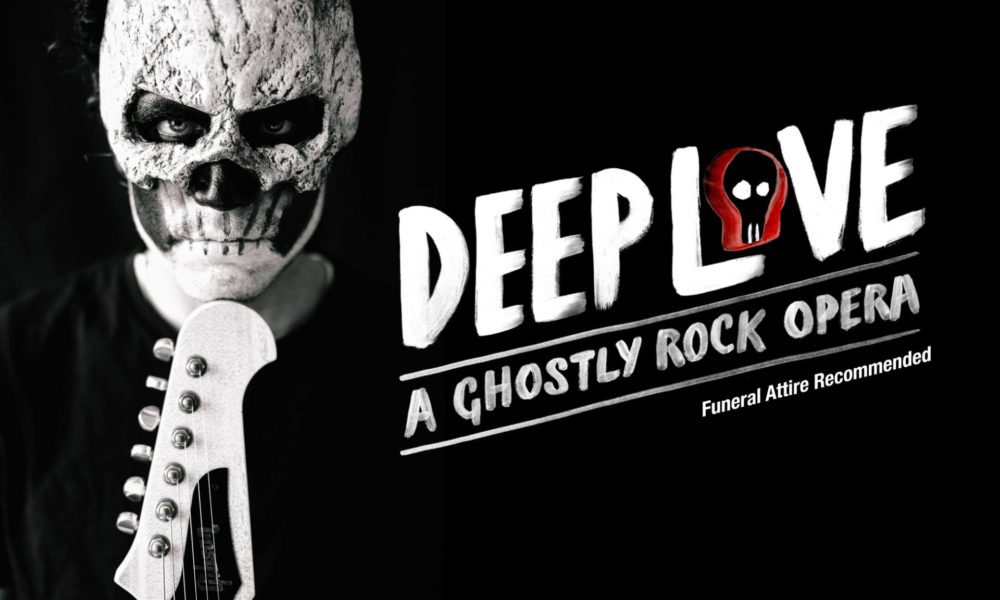 Deep Love: A Ghostly Rock Opera is a story of love and loss where sweethearts become adversaries in pursuit of what they cannot live without. Told entirely through haunting rock and roll, Deep Love features Jon Peter Lewis (American Idol, Midas Whale on The Voice), Amy Whitcomb (The Voice,The Sing Off), Melanie Stone, and Garrett Sherwood. Heartwarming and heartbreaking, it promises to delight all ages. Audience members are encouraged to arrive dressed in their best funeral attire.

Deep Love: A Ghostly Rock Opera is the brainchild of songwriters Ryan Hayes and Garrett Sherwood.  Jon Peter Lewis, who was an American Idol finalist before he competed on The Voice with Hayes as the folk duo Midas Whale, began collaboration on the project just after its creation in 2010 while they lived in Rexburg, Idaho. Over the last nine years, the audience for Deep Love has grown from the two-dozen attendees at a reading in Lewis’ living room, to thousands of devoted fans across the mountain west. In 2015 Deep Love: A Ghostly Rock Opera was selected as a featured production in the New York Musical Theatre Festival (NYMF)“, following which was invited to be workshopped by the Johnny Mercer Writer’s Colony at the Goodspeed Theatre. “Deep Love has been a labor of love from the beginning and with nine years of lessons learned, this season’s production promises to be the best yet.” says Garrett Sherwood. Deep Love: A Ghostly Rock Opera has been called “A Polished Show” by The New York Times; “A credible sounding rock amalgam of the likes of Queen, Led Zeppelin, and Aerosmith…The lyrics are skillfully contemporary” by Theater Scene; and “Fabulously ghoulish!” by Backstage.com.

GARRETT SHERWOOD (Music/ Lyrics/ Book) a native of Chicago, a father of two beautiful little boys, husband to an incredible wife, has been building a fruitful career in Influencer Marketing while spending whatever time he has tended to his homestead in Payson, Utah with his family.

JON PETER LEWIS (Director/Actor) is a celebrated musician who was a finalist on American Idol and competed on The Voice with Ryan Hayes as the folk duo Midas Whale. Jon met Ryan and Garrett in 2009 at an open mic in Rexburg, Idaho and joined in the collaboration of Deep Love. Jon’s discography includes 3 solo albums and the folk duo’s most recent release, Sugar House.www.jonpeterlewis.com.

JOSHY SOUL (Musical Director) is a singer, songwriter, producer, and performer born in Long Beach, California, now living in Salt Lake City. He started playing piano at 18 and then 5 years later, became professional playing behind other artists like Yuna, Tori Kelly, Alex Boye, Music Directing Deep Love, and more. Joshy Soul wrote his first record entitled, “Vintage Dreamin’ in 2016. Since then, he has been traveling the world working on other artist’s albums and playing shows.

AMY WHITCOMB (Actor) has been in love with music since she began piano lessons at the young age of 3. In 2013, Amy was on NBC’s The Voice, she released her first solo single and toured with other artists from the top 32. Amy released her debut solo EP in early 2015, but soon found herself back in Utah with her love for a cappella rekindled. She is now the Artistic Director of BYU Noteworthy, fronts Toned Entertainment’s party band Synergy, is involved in a variety of studio & stage projects as well as teaching voice, piano, and musical theatre.

MELANIE STONE (Actor) was born and raised in Modesto California. She studied Public Relations at BYU Idaho and did absolutely nothing with it. Instead, she’s either playing your best friend who’s attempting to murder you in a Lifetime movie, or a Christmas elf trying to save the day in a B list fantasy film. She’s thrilled to again have the opportunity to play Constance, and combine her love of music and drama in this romantic tragedy.