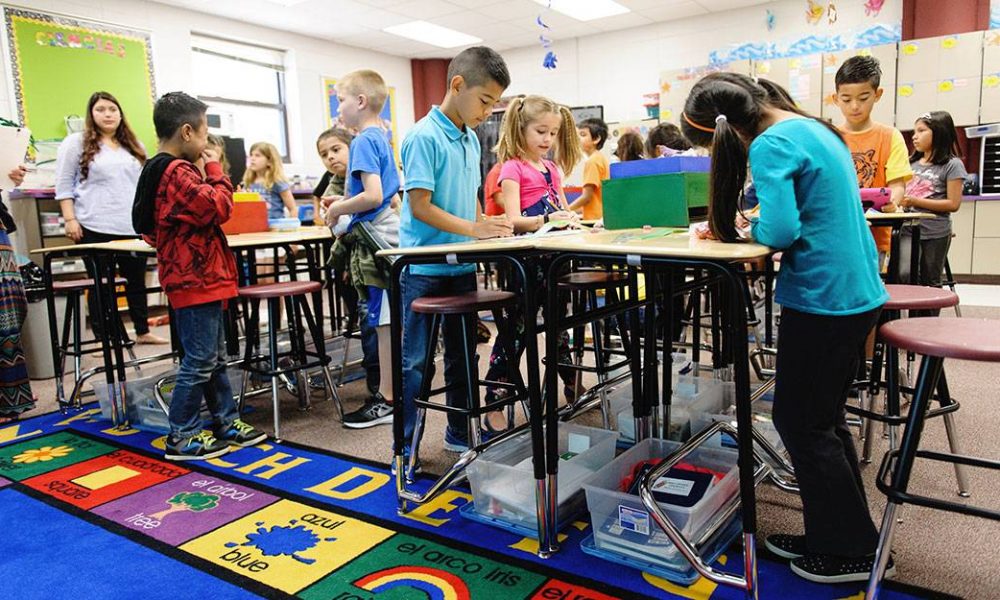 There are many emerging benefits to standing desks in the classroom. Research published yesterday in the American Journal of Public Health adds to the list. Texas A&M researchers have shown, for the first time, evidence that standing desks in classrooms can slow the increase in elementary school children’s body mass index (BMI)—a key indicator of obesity—by an average of 5.24 percentile points.

“Research around the world has shown that standing desks are positive for the teachers in terms of classroom management and student engagement, as well as positive for the children for their health, cognitive functioning and academic achievement,” said Mark Benden, PhD, CPE, an associate professor in the Department of Environmental and Occupational Health at the Texas A&M School of Public Health and an author of the study. “It’s literally a win-win, and now we have hard data that shows it is beneficial for weight control.”

Twenty-four classrooms at three elementary schools (eight in each of the three schools) in College Station, Texas, participated in the study. At each school, four classrooms were outfitted with stand-biased desks (which allow students to sit on a stool or stand at will) and four classrooms in each school acted as a control and utilized standard classroom desks. The researchers followed the same students—193 in all—from the beginning of third grade to the end of fourth grade.

The researchers found that the students who had the stand-biased desks for both years averaged a three percent drop in BMI while those in traditional desks showed the two percent increase typically associated with getting older. However, even those who spent just one year in classrooms with stand-biased desks had lower mean BMIs than those students in traditional seated classrooms for their third and fourth grade years. In addition, there weren’t major differences between boys and girls, or between students of different races, suggesting that this intervention works across demographic groups.

“Classrooms with stand-biased desks are part of what we call an Activity Permissive Learning Environment (APLE), which means that teachers don’t tell children to ‘sit down,’ or ‘sit still’ during class,” Benden said. “Instead, these types of desks encourage the students to move instead of being forced to sit in poorly fitting, hard plastic chairs for six or seven hours of their day.”

Many school-based initiatives for weight loss focus on better, more nutritious cafeteria lunches, and although these programs are important, they don’t focus on the other side of weight control: calories expended.

Previous studies from Benden’s lab have shown that children who stand burn 15 percent more calories, on average, than those who sit in class, but this is the first study showing, over two years, that BMI decreases over time (versus students in traditional desks) when using a stand-biased desk.

“It is challenging to just measure weight loss with children,” Benden said, “because children are supposed to be gaining weight as they get older and taller.”

At the beginning of this study, which was funded by the National Institutes of Health (NIH), roughly 79 percent of the students were of normal weight category, 12 percent were overweight and nine percent were obese, according to height and weight measurements made by the researchers. These are better numbers than nationally, where 14.9 percent of children were overweight and 16.9 percent were obese in 2012. The fact that the students who started at a healthy weight benefited from stand-biased desks as much as they did might indicate that these desks help students who aren’t overweight maintain their BMI, while at the same time help those who start out overweight or obese get to a healthier weight.

These desks, designed by Benden and his team, are called stand-biased, not “standing” because they do include a tall stool the students can perch on if they so choose. They also include a footrest, a vital feature because it allows children to get their lower backs out of tension and reduce leg fatigue to stand more comfortably over time. These United States-patented desk designs are now licensed to Stand2Learn, which has commercialized the products through translational research focused on moving university studies to publicly available solutions.