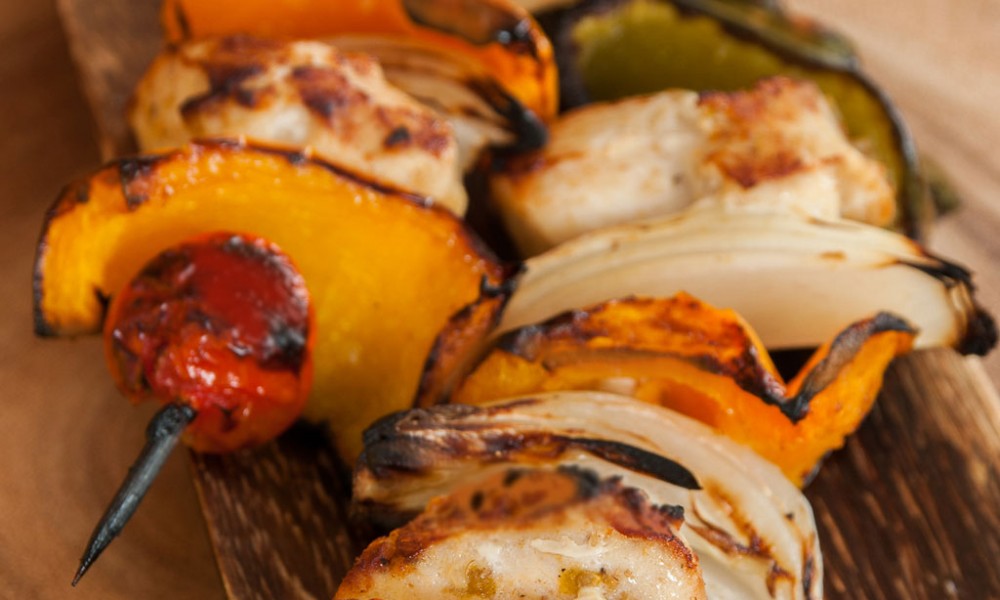 What better way is there to celebrate the start of the summer solstice than grilling delicious kebabs? These mostly veggie kebabs are easy to prepare, fun to eat and taste like summer.

The origin of the kebab may lie in the scarcity of cooking fuel a couple of millennia ago, which made the cooking of large pieces of meat difficult. The answer, of course, was to use smaller cuts of meat. The kebab also may have origins in Persia, now modern day Iran. It is commonly believed that Persian solders used their swords to grill meat over open fires; the swords were later replaced by skewers. Others say that the term “shish kebab” comes from Turkish words literally meaning “skewer” and “roast meat.” No matter the origin, this cooking technique produces a wonderful meal.

In Moroccan cuisine, chicken is more commonly cooked. This recipe features turkey, though chicken may be used. Turkey breast is low in saturated fat, which is good for prevention of heart disease and high in satiating protein. Turkey’s mild flavor is magnified with a medley of cumin, coriander, cayenne pepper and cinnamon spices, giving these kebabs a Moroccan flair.

The secret to great tasting kebabs and grilled foods lies in a spice-filled marinade. The combination of garlic, lemon juice, olive oil and spices penetrates the turkey, keeping it moist. Marinating meats also helps prevent the formation of cancer-causing substances that tend to form from being exposed to high heat and charring. Formation of cancer-causing substances is not an issue with grilled plant foods. Yet, marinating vegetables caramelizes their natural sugars while cooking, magnifying their flavors.

Enjoy Moroccan Kebabs with Vegetables and Turkey served over a bed of whole-wheat couscous or wrapped in whole-wheat flat or pita bread drizzled with tangy yogurt.

Remove 2 tablespoons marinade and set aside in large bowl.

Cut and seed each bell pepper; cut into 8 pieces and add to large bowl with reserved marinade. Add cherry tomatoes and toss to coat with marinade.

Cut onion in half lengthwise and then each half into quarters, making 8 wedges.

To assemble kebabs on skewers slide on tomato, green pepper, turkey, half an onion wedge, red pepper, other half onion wedge, turkey, yellow pepper and tomato or in preferred order. Lay kebabs on baking pan(s).

Broil or grill kebabs 6 minutes. Turn kebabs and cook 6-8 minutes or until internal temperature of turkey is 165 degrees F.